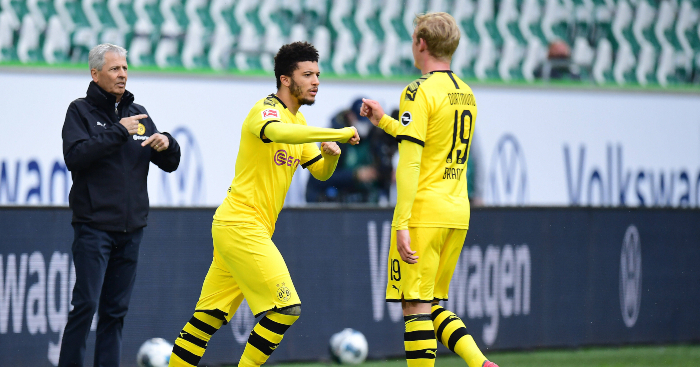 Still working his way to full fitness after returning from injury, Jadon Sancho is using his cameos off the bench for Borussia Dortmund to remind us he’s one of the most exciting players in the world.

Sancho has had to start both of Dortmund’s first two fixtures since the return of the Bundesliga on the bench, but he came on for the final 25 minutes against Wolfsburg to help seal a 2-0 victory for BVB to maintain the pressure on Bayern Munich at the top of the table.

Raphael Guerreiro scored for the second consecutive match to give Dortmund a 1-0 lead at the break.

But Dortmund were struggling to find the second goal to kill the game until Sancho replaced Julian Brandt in the 65th minute.

Within five minutes of being on the pitch, Sancho nutmegged John Brooks, who was then booked for scything down the winger as he burst past.

Jadon Sancho was on the pitch for five seconds and he nutmegged a defender and got him booked 😳#BundesligaIsBack pic.twitter.com/ci7JOiDuBR

And 13 minutes later Sancho provided the assist for Achraf Hakimi to make it 2-0 with a run which started from inside his own half.