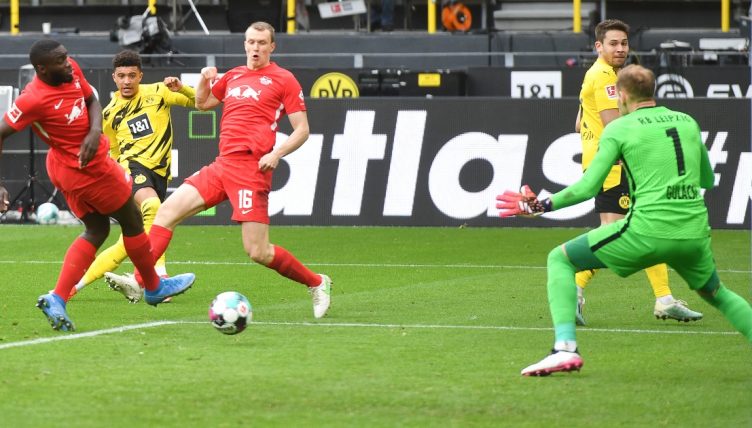 The Manchester United hierarchy will have kept a close eye on Jadon Sancho in Borussia Dortmund‘s clash with RB Leipzig on Saturday afternoon, a key match in the race for Champions League qualification in the Bundesliga.

Securing a place in the Champions League next season may strengthen Dortmund’s hand when it comes to negotiating for their star players Sancho and Erling Haaland, and they’re making a real go of it after a season to forget.

Dortmund’s 3-2 victory over RB Leipzig saw them move back up into the top four after a fifth consecutive victory, putting the pressure on Eintracht Frankfurt for their match against Mainz.

There’s reportedly a “gentleman’s agreement” to allow Sancho to leave this summer if the right offer comes in, and he may have given them the perfect parting gift.

The 21-year-old England international scored twice in the 3-2 win, which also confirmed Bayern Munich’s ninth consecutive league title, with the match-winner arriving in 87th minute after Leipzig had fought back from two goals behind.

He did it in style, too, laying the ball off to Raphael Guerreiro on the overlap with a sexy backheel before receiving it back, and finishing confidently.

Haaland was unavailable through injury and had to watch from the stands, and it evidently meant a lot to him.

It's the Jadon Sancho Show 🤩💫

The back flick, the cutback, and the finish 🤝

Big energy on the pitch, BIG energy off it too! 😤