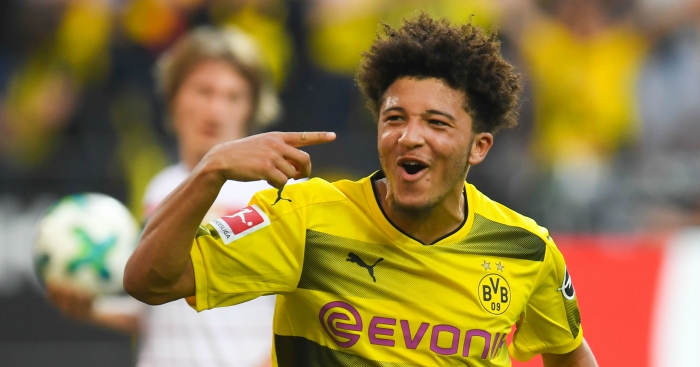 Former Manchester City prospect Jadon Sancho had a day to remember as he scored his first goal for Borussia Dortmund and also provided two more assists.

Sancho left City last summer and took the bold step of moving to the Bundesliga in order to play more first-team football.

Still only 18, the winger has made nine league appearances for Dortmund this term, and produced his best display for the club in Saturday’s 4-0 victory over Bayer Leverkusen.

Sancho opened the scoring early on after latching on to a pass from Christian Pulisic before finishing neatly.

Marco Reus doubled Dortmund’s lead in the second half after converting from Mario Gotze’s assist.

But Sancho grabbed the attention once more by creating a goal for Maximilian Philipp, featuring a sumptuous first touch to bring down a long ball.

The young Englishman sets up Dortmund's third with an outrageous touch.

What a prospect he looks 🙌 pic.twitter.com/R3yjUbLlmT

And the England youth international was still not done there as he went on to provide the cross for Reus’ second of the afternoon.

The player himself then took to Twitter to express his delight on a landmark day in which he became the youngest Englishman to score in the Bundesliga.

I can't describe the feeling scoring my first professional goal in front of the Yellow Wall and getting  2 assists makes it even better. Well done boys. The energy from our fans was amazing, Danke! 💛 pic.twitter.com/dDIM4TbIFN