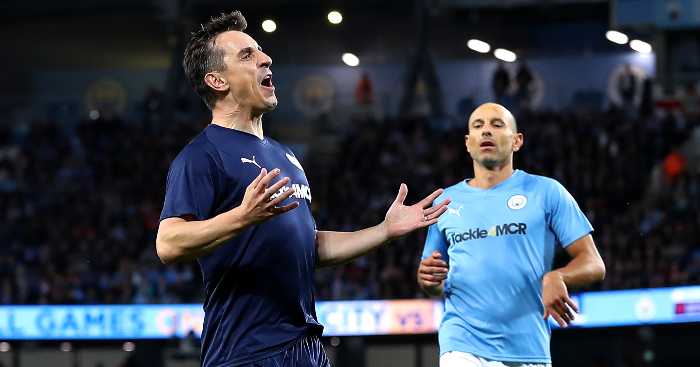 Jamie Carragher wasn’t happy with Gary Neville, after his Sky Sports colleague was caught out of position to allow Martin Petrov to score in Vincent Kompany’s testimonial.

The pair featured alongside one another in a Premier League all-stars XI, taking on Manchester City‘s legends in the friendly at the Etihad.

Petrov burst forward in the first minute, opening the scoring in a game that eventually finished 2-2, bursting past Neville who pushed forward, while Ashley Cole played the Bulgarian onside.

“I think I should’ve gone back with him,” said Neville, who was brought off after pulling his hamstring. “But I also think Carragher should’ve deepened. Why a centre-half’s ahead of his right-back, I’ll never know.”

Watch it all unfold, and what both of them had to say, below:

🎙 – "Gary, Gary, Gary – what on earth are you doing!?" 🤣@GNev2 loses his man early on and Manchester City's legends have the lead through Petrov!

Carragher after the match:

“He gave a goal away in the first minute, pulls his hamstring and then after he goes off – we’re fine!” 😂@Carra23 still isn’t happy with @GNev2…👀 pic.twitter.com/lq9UF106E3

Watch: All the goals as Man City Legends draw 2-2 with Premier League All-Stars