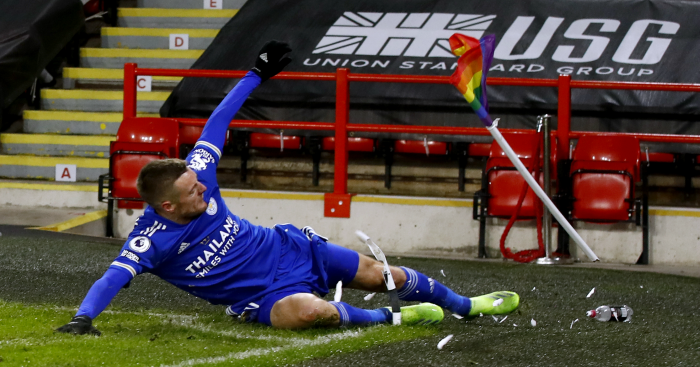 Jamie Vardy celebrated his last-minute winner in Leicester City‘s 2-1 win at Sheffield United in classic Jamie Vardy fashion: by slide tackling the corner flag in half.

Vardy has previous for animated celebrations at Bramall Lane. It’s well-documented that the Sheffield-born striker is a fan of United’s bitter rivals Sheffield Wednesday, and Vardy seems to relish scoring against Chris Wilder’s team more than any other.

It was no different during Sunday’s Premier League match. With the score locked at 1-1 and with Leicester in danger of dropping points against the league’s bottom side, and doubling Sheffield United’s points tally in the process, James Maddison released Vardy through on goal with a delicious through ball.

You can guess the rest; the striker tucked the ball past Aaron Ramsdale with aplomb and wheeled away bellowing in delight.

The corner flag must have felt apprehensive as the match-winner approached with menace. Seconds later, it lay in tatters as Vardy executed a textbook two-footed tackle on the innocent item.

This was an occasion where a goal celebration definitely merited a yellow card. We suspect Vardy didn’t give one solitary eff.

How the f*ck is port and Red Bull fan Jamie Vardy still this good at 33?