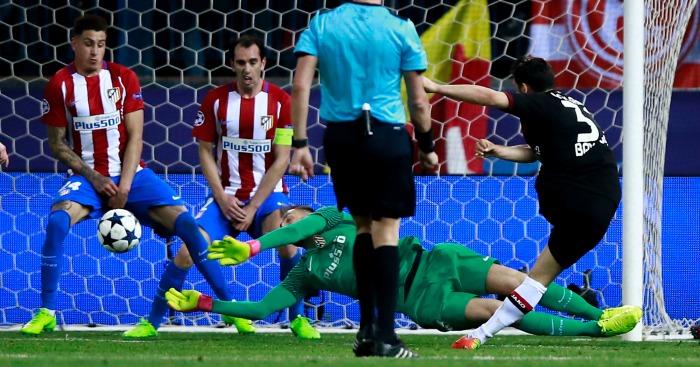 Jan Oblak was the star of the show as Atletico Madrid held out Bayer Leverkusen to qualify for the Champions League quarter-finals on Wednesday.

With a 4-2 advantage after the first leg, Atletico secured a 0-0 draw at the Vicente Calderon but had Oblak to thank for a string of superb saves to thwart the visitors.

The Slovenia international’s ridiculous triple save in the second half ensured Leverkusen were not able to gain a foothold to mount a comeback – and they will certainly be added to Oblak’s highlight reel.

This is quite ridiculous from Oblak pic.twitter.com/wTrumGoeFz

No other goalkeeper has kept more clean sheets than Oblak in the Champions League since he made his debut in the competition, with the 24-year-old level with Gianluigi Buffon on 14.

Speaking after the game, Antoine Griezmann heaped praise on the stopper.

“It’s why we say he’s the best goalkeeper in the world,” he said. “He proves it in every game and he did so again.”