Watch: Joe Gomez fumes after being tackled by Adrian, *his own keeper* 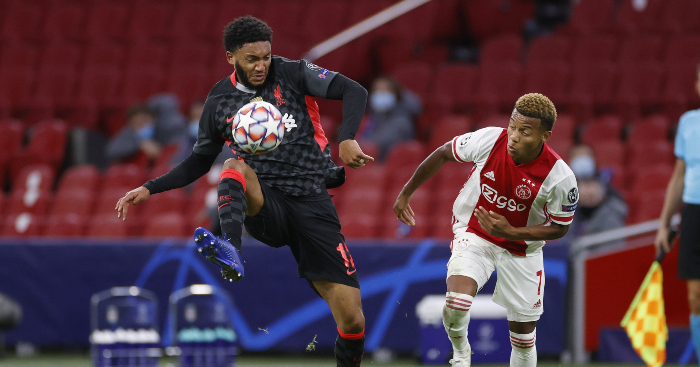 Joe Gomez summed up the reaction of most Liverpool fans when he collided with under-fire goalkeeper Adrian in the first half of the Reds 1-0 victory at Ajax in the Champions League on Wednesday night.

Liverpool have struggled defensively at the start of 2020-21 – prompting some intriguing analysis by BT Sport prior to the clash with Ajax – while their problems have been exacerbated by injuries to key players Alisson Becker and Virgil van Dijk.

Alisson’s injury has opened the door for Adrian to play a run of games in goal, but the former West Ham stopper has made a number of errors, having also been at fault in Liverpool’s Champions League exit to Atletico Madrid last term.

While the Spaniard made a number of smart stops against Ajax, the nervousness among the Liverpool backline was also evident, with Gomez clearly showing his frustration after essentially being tackled by his own goalkeeper.

Joe Gomez is literally every Liverpool fan to Adrian after tackling his own player… pic.twitter.com/iUtC6KzhNH

Watch: Rio explains why LFC defence can be exploited by ‘average’ players