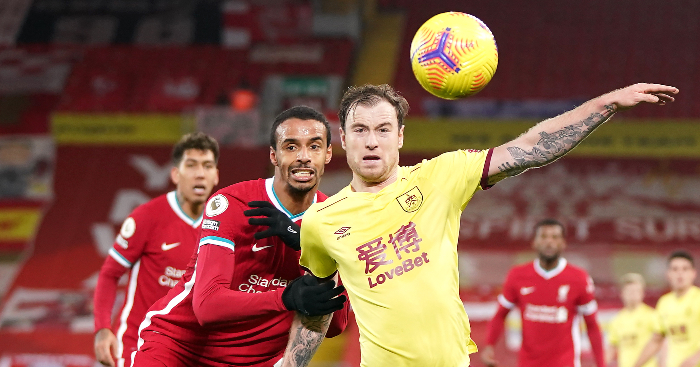 Joel Matip was back in the starting line-up for Liverpool‘s clash with Burnley on Thursday night, but he was unable to stop them losing their first Premier League match at Anfield in well over three years.

Burnley put in a characteristically rugged performance to claim their 1-0 victory, defending diligently and denying Jurgen Klopp’s men space with men behind the ball as Ashley Barnes and Chris Wood made a nuisance of themselves further forward.

Barnes proved the match-winner, dispatching a late penalty after getting taken out by Alisson, and he was getting under Liverpool’s skin all night.

While Klopp and Sean Dyche exchanged verbals in the tunnel, it was starting to kick off on the pitch as the half-time whistle was blown following a coming together between Barnes and Fabinho.

As the Burnley forward remained on the floor, Matip stood over him and did… this. We’re not entirely sure what it is, and we don’t think it would occur to another player in the league to do it, but we love him for it.

Joel Matip being Joel Matip was the best part of the game for me #LFCBUR pic.twitter.com/1MBX1wlTVB

Joel Matip is a legend. pic.twitter.com/hUIeLs7deD