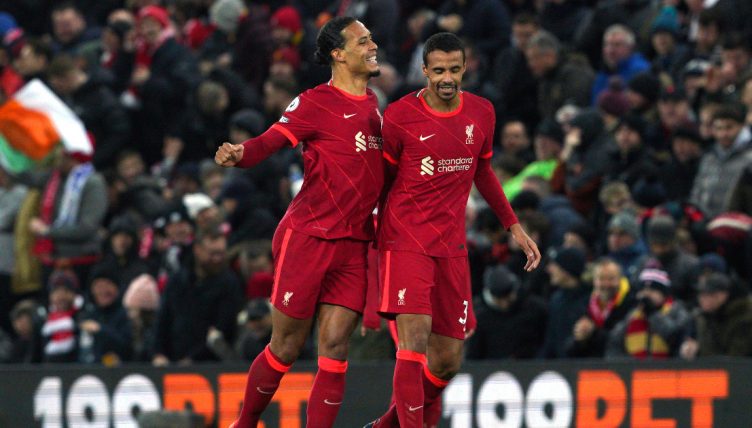 Liverpool were rampant on Wednesday night, smashing six past a hapless Leeds United, and it could have been more.

Centre-backs Joel Matip and Virgil Van Dijk both helped themselves to goals to add to braces from Sadio Mane and Mohamed Salah, and the pair shared a particularly nice moment after Matip had scored to make it 2-0 to the hosts.

They’re both two of the best defenders in Europe, and Matip in particular was excellent in the victory against Leeds, bursting forward from the back, trading passes with Salah before finishing like a striker, and Van Dijk made sure he got his deserved praise.

Just Joel completing one of his mazy runs 😍

In the aftermath of the goal, the pair hugged, and Van Dijk lifted Matip’s shirt to show off the back to the raucous Anfield crowd. This is Matip, remember the name.

The Cameroonian 30-year-old is arguably the most underrated defender in the country, as his partner often takes the praise, but Van Dijk made perfectly sure that Matip finally got his moment in the limelight with this great moment of team spirit.

Matip was clearly delighted with his rare goal, and stated after the game that he was glad to see one of his attempts finally find the back of the net.

“I went forward and Mo gave to me just a brilliant pass,” Matip told Liverpool’s website after the game.

“I didn’t have to stop at all, I just could continue my run and it was the best pass. I didn’t have to think a lot because the ball directly came in front of me and I am happy that after a few tries, the ball finally goes in!”

Not many other teams possess a partnership at the back with the defensive ability, goal threat and wholesomeness as Liverpool currently do.