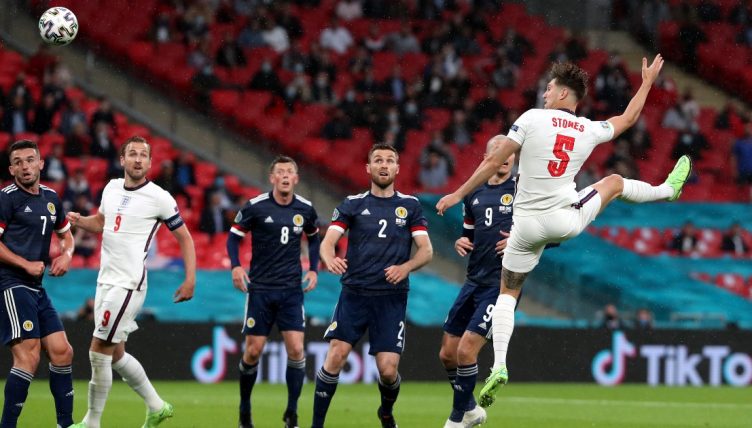 The first half between England and Scotland‘s Euro 2020 clash at Wembley ended goalless, but both sides could have opened the scoring early on.

Scotland had their best chance after just three minutes, in which Southampton striker Che Adams found himself unmarked in the box but saw his goal-bound shot blocked by John Stones.

A short while later, Stones found himself in the action at the other end, and came closest for England. The Manchester City centre-back leapt to meet Mason Mount’s corner but his header was kept out by the inside of the post.

The ITV pundits, including Roy Keane at half-time, suggested that the England defender just misjudged the flight of the ball and should have scored if he’d been able to time his jump better.

Both sides had chances as the half wore on, with the other highlight of the opening 45 being a Jordan Pickford save to deny a well-struck volley by Motherwell’s Stephen O’Donnell.

What a chance that is! 😮

Stones meets a corner from close range… but his effort cannons back off the post #ENGSCO | #ITVFootball | #Euro2020 pic.twitter.com/cXH2L7UQiu