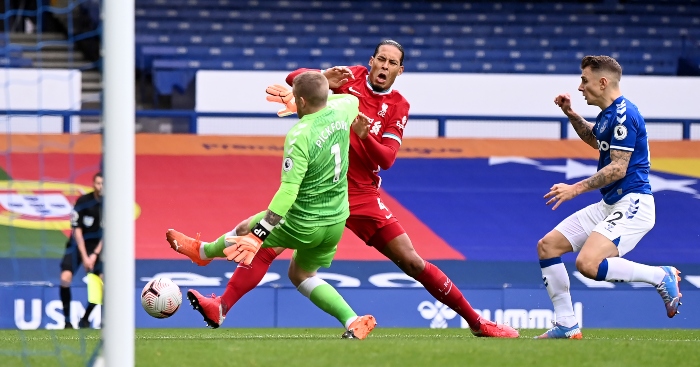 The Merseyside derby is one of the most anticipated events on a sporting calendar and there was plenty of early drama between the two sides on Saturday.

Liverpool bounced back from their 7-2 defeat against Aston Villa and took the lead through Sadio Mane after just three minutes at Goodison Park.

The Reds then thought they had a penalty when Everton‘s Jordan Pickford came surging out of his goal and clattered into Virgil van Dijk, leaving the defender in a heap on the floor.

"He could have easily been sent off."

"I'm very surprised it's just been forgotten about?"

Should VAR have stepped in after this? pic.twitter.com/wTcW6CHcIf

However, the goalkeeper was saved by a marginal VAR decision which ruled that Van Dijk was offside when he was put through on goal.

Joe Gomez replaced the Holland international and Everton drew level through a Michael Keane header in the 19th minute.