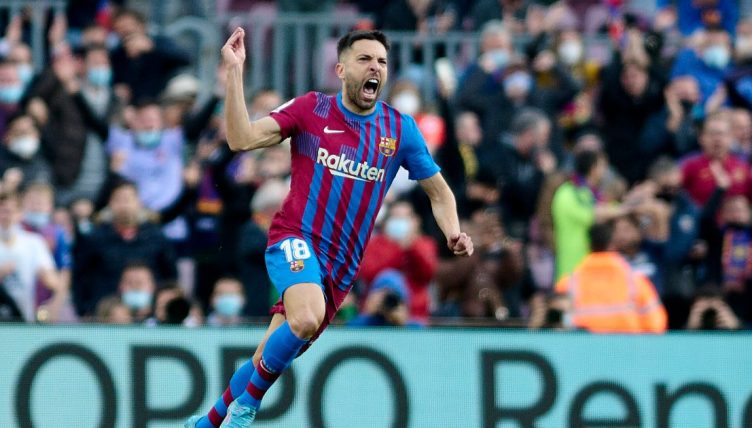 Jordi Alba produced a stunning, floating volley for Barcelona to equalise against Atletico Madrid in their La Liga clash at Camp Nou.

The Catalans had gone behind early due to a Yannick Carrasco finish but levelled the game thanks to Alba’s inch-perfect volley just two minutes later.

Dani Alves received the ball on the edge of the Atletico box and floated a cross-pitch ball across towards the left-back, who was rushing into space from deep on the left of the pitch.

The Spain international adjusted his run and body before speculatively hitting the ball hard, slicing it upwards.

It floated over the head of Jan Oblak and the rest of the Atletico defence, looping into the far-right corner to complete a stunning finish.

After scoring a goal of the season contender, Alba celebrated wildly as did much of the Nou Camp crowd.

The lead-up to the match had been dominated by a war of words between the two managers, Xavi and Diego Simeone.

“I remember Xavi saying in 2016 that Atletico Madrid’s style wasn’t a style for big teams,” Simeone had said.

“Now he will have the opportunity — with all these new players arriving, he has eight now for three positions (in attack) — he will be able to deploy the team that he wants, that he imagines, what he grew up with at Barcelona.

“When you have only ever experienced one situation, you don’t understand any other.”

Xavi refused to back down and repeated his past comments.

“It wouldn’t be Barça’s style,” he said. “People wouldn’t understand us playing like Atletico Madrid, it wouldn’t fit.

Jordi Alba with an absolute BEAUTY of a volley! 😍

Barca come up with an immediate response after Carrasco gave Atleti an early lead 🔥 pic.twitter.com/jVozTS9956

Ranking every player to wear No.11 for Barcelona since 1995