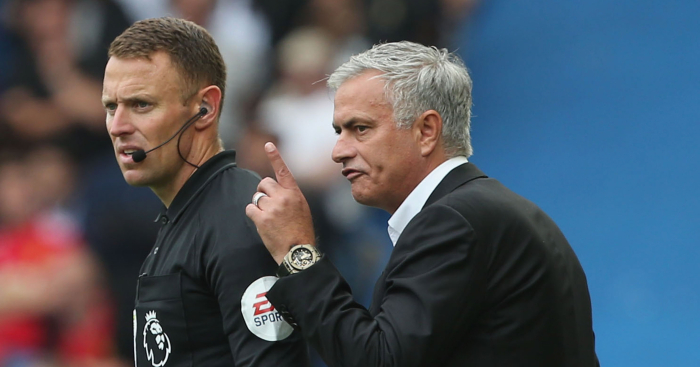 Jose Mourinho cut a frustrated figure in his post-match interview after Manchester United‘s 3-2 defeat at Brighton on Sunday.

Goals from Glenn Murray, Shane Duffy and Pascal Gross condemned United to a disappointing defeat at the Amex Stadium.

United scored through Romelu Lukaku and a late Paul Pogba penalty but were always behind from the moment Murray put Brighton ahead in the 25th minute.

It was only the third time United have conceded three or more goals in 122 matches under Mourinho.

Mourinho was not in the mood for discussing the defeat in his post-match interview, offering only short responses to the reporter’s questions – one of which drew a particularly barbed response.

“It didn’t seem there’s enough communication, enough chemistry among your team. Is that fair to say?” she asked.

“You must be fantastic in your job to – from the stands – to speak about chemistry between the players,” an unhappy Mourinho replied.