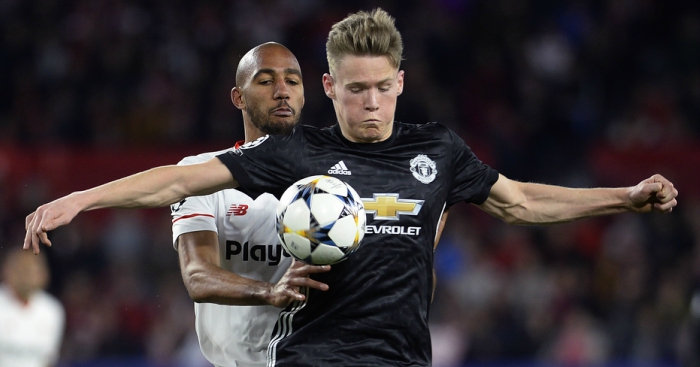 Paul Pogba’s omission from the Manchester United side dominated the headlines on Wednesday night, meaning Jose Mourinho was mightily relieved to be asked a question about Scott McTominay.

Pogba has been out of form and out of favour with Mourinho in recent weeks and was dropped for McTominay as United faced Sevilla in the first leg of Champions League’s last 16.

The 21-year-old produced an assured performance as United drew 0-0, although Pogba joined the action after only 17 minutes anyway following an injury to Ander Herrera.

Mourinho was asked a host of questions about his relationship with Pogba in the post-match press conference and couldn’t hide his delight at being asked a question on McTominay by BT Sport.

"No more Pogba questions!" 😂@DesKellyBTS and José Mourinho hug it out after the match 🤗 pic.twitter.com/OFIIhkYLyZ