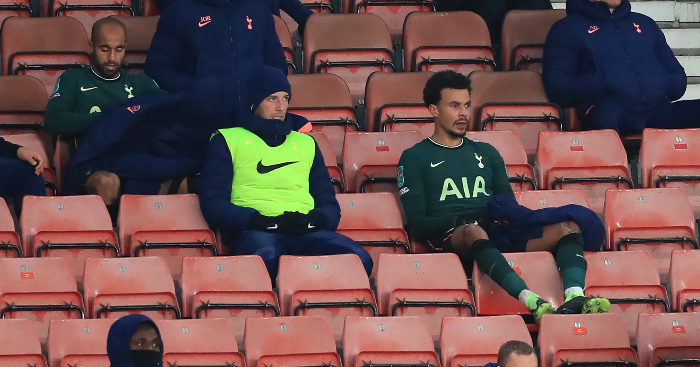 Tottenham are through to the League Cup semi-finals after a relatively comfortable 3-1 victory over Stoke, but it wasn’t all smiles after the result.

Dele Alli was given a rare opportunity to work his way back into Jose Mourinho’s good books, but he left his coach fuming after a failed flick gave away possession in midfield.

Spurs had put in a dominant performance at the Bet365 Stadium, but Stoke equalised midway through the second half with a quick counter-attack, having pounced on Alli’s error.

Alli was hooked 13 minutes after the incident and didn’t look at all happy as he trudged off.

“Yes, for me a player that plays in that position is a player that has to link and create and not to create problems for his own team,” Mourinho told reporters post-match.

“I was angry. In that situation, an objective counter-attack would probably end with a goal, and it ended with a counter-attack behind our defenders.

“We were unbalanced because when you are in possession you have full-backs out wide and another midfielder in a different line and they caught us in a counter-attack and they transformed the result of the game that was totally in our hands, so yes I am upset.”