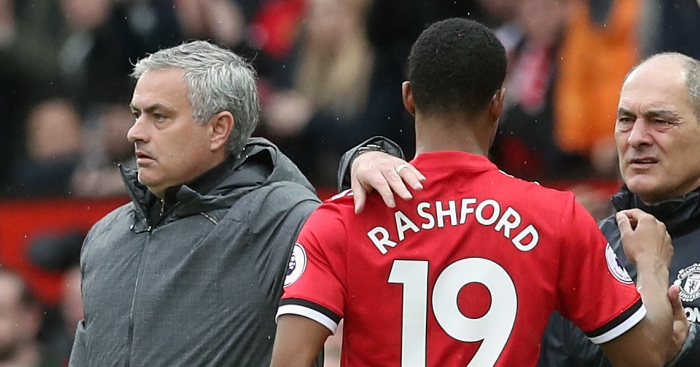 Jose Mourinho has revealed the reason he withdrew Marcus Rashford from Manchester United‘s victory over Liverpool.

Rashford had scored two goals, including an excellent opener, but had also received a yellow card and during half-time of Sky Sports’ broadcast, pundits reviewed some instances where he could have been given a second booking.

The winger had put in a fantastic performance, and with Alexis Sanchez once again putting in a disappointing performance, Rashford was tasked with being the real driving force in United’s attack.

But once Eric Bailly planted the ball into the back of his own net, Mourinho decided to take Rashford off, much to the dismay of the home supporters.

And the Manchester United manager was asked to explain the decision – which was made with 20 minutes of the game still to play – in his post-match press conference.

“At half-time, someone told me Gary Neville was asking Marcus Rashford to get a red card,” Mourinho said.

“I was scared because I thought maybe the referee was watching at half-time and was influenced by Gary.”

Jose Mourinho says he took Rashford off because @GNev2 was asking for a red card 👀 pic.twitter.com/DbTivuKj7W