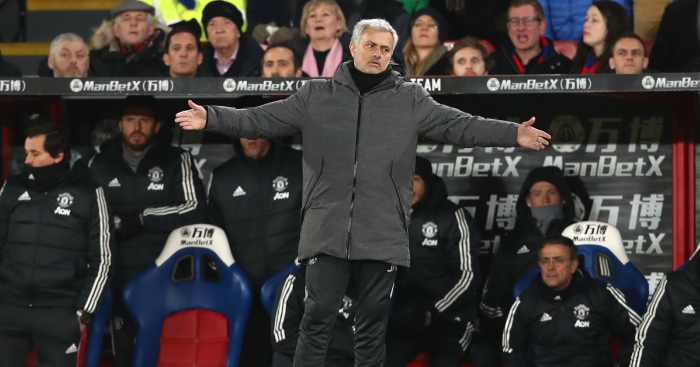 Manchester United manager Jose Mourinho was quick to apologise after kicking a water bottle during his side’s victory over Crystal Palace.

United won the game having come back from two goals down in a wonderful second half of Monday night football, with Nemaja Matic hitting a brilliant winner in stoppage time.

Emotions were running high during the all-action second half, and Mourinho momentarily forgot his surroundings as he kicked a water bottle towards supporters.

The United boss was banned in 2016 having lashed out at a refereeing decision and kicked a bottle, with the FA claiming he “endangered people around him”.

And as Mourinho kicked the bottle rather timidly at Selhurst Park, he immediately realised his mistake as he threw his head into his hands and apologised to the supporters, who seemed to be laughing along with him.

“It was empty,” Mourinho said after the game. “It’s one thing when it is with the referee and another thing if it is the basic frustration of the game without any kind of aggression. It was good fun with the people behind.”

Watch: Gary Neville says Paul Pogba’s first half display is ‘like a joke to him’