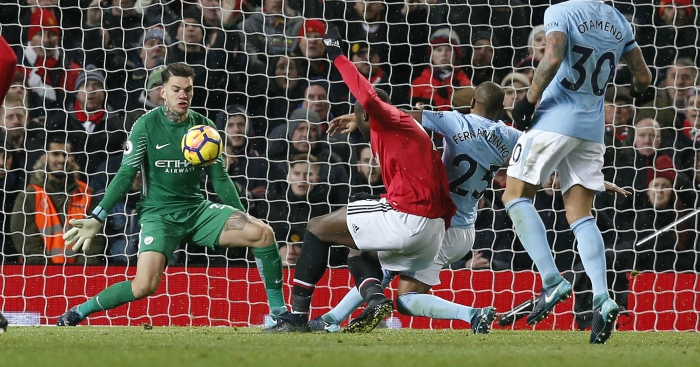 Manchester City defeated Manchester United by two goals to one at Old Trafford, but it all could have been different.

Romelu Lukaku found the ball at his feet three yards from goal with just five minutes on the clock and looked a cert to equalise.

However City goalkeeper Ederson pulled off a brilliant save to earn all three points for Pep Guardiola’s undefeated men.

David Silva put City in front before Marcus Rashford equalised in a flurry of activity just before half-time.

After a number of enforced defensive changes for both sides, it was Lukaku’s clearance which failed to make it out of the box and landed at the feet of Nicolas Otamendi for the winner.

The result left United 11 points behind their cross-city rivals, with the title looking more and more likely to be heading City’s way.

And the video below won’t help Lukaku sleep tonight, with manager Jose Mourinho looking particularly unpleased with the Belgian forward.

How Manchester United’s record with and without Paul Pogba compares

Can you name the last 20 goalscorers in the Manchester derby?