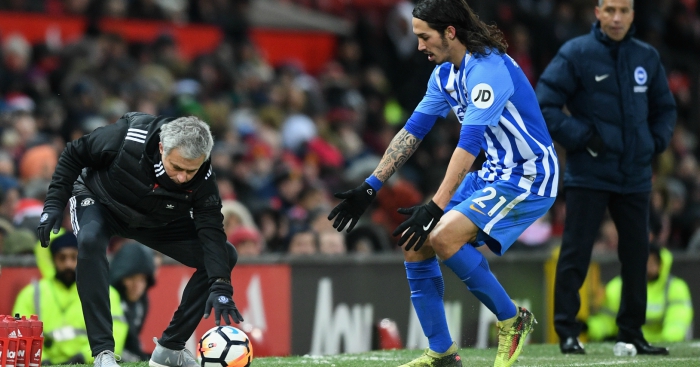 Jose Mourinho’s Manchester United made it into the semi-finals of the FA Cup with victory over Brighton at Old Trafford.

The manager has been very much the centre of attention in the red half of Manchester this week, after his side crashed out of the Champions League in the last 16.

Mourinho made some bizarre comments after United’s defeat to Sevilla, before a 12-minute speech at his pre-match press conference on Friday.

The manager has been good value on the touchline of late though, sharing a laugh with Crystal Palace supporters after kicking a water bottle in their direction in a moment of frustration before his side’s late winner.

And the FA Cup tie was no different, with Mourinho using the snowy conditions at Old Trafford to take out his frustrations.

He took a swipe at some snow near the dugouts at Old Trafford, inadvertently kicking it towards fourth official Bobby Madley.

But as he was once more quick to apologise for his actions, fortunately the official saw it in just as amusing a light.