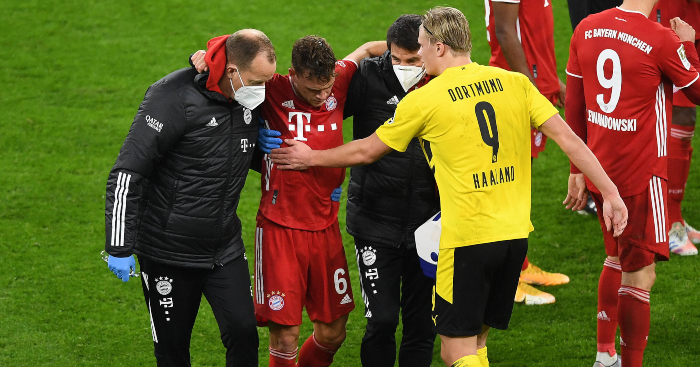 Bayern Munich boss Hansi Flick refused to speculate on the severity of injury suffered by key player Joshua Kimmich in the 3-2 victory over Borussia Dortmund in Der Klassiker on Saturday.

Goals from David Alaba, Robert Lewandowski and Leroy Sane saw Bayern take all three points against Dortmund, who took the lead through Marco Reus before pulling a goal back late on thanks to Erling Haaland.

Haaland was involved in the injury to Kimmich that somewhat overshadowed the occasion, albeit there was certainly no malicious intent from the striker.

After stealing Kimmich of the ball around the halfway line, Haaland rode a tackle the Germany international, who appeared to injure his knee in the process.

A lengthy period of treatment followed, after which Kimmich was helped from the field in tears and had to be consoled by Flick on the touchline.

“Joshua will fly with us and then be examined,” Flick said. “I don’t know yet and don’t want to anticipate anything. We have to wait now. I am not participating in speculation.

“He’s an important player for us in this position. In addition to his mentality, he also has outstanding quality. It’ll be difficult, but we made it today against a good Dortmund team.”

Joshua Kimmich in Tears after injury vs Borussia Dortmund#BorussiaDortmundvsBayernMunich pic.twitter.com/68xnogwbwc

Joshua Kimmich leaves Der Klassiker with an injury in the 36th minute. pic.twitter.com/yiJtXgWSXF