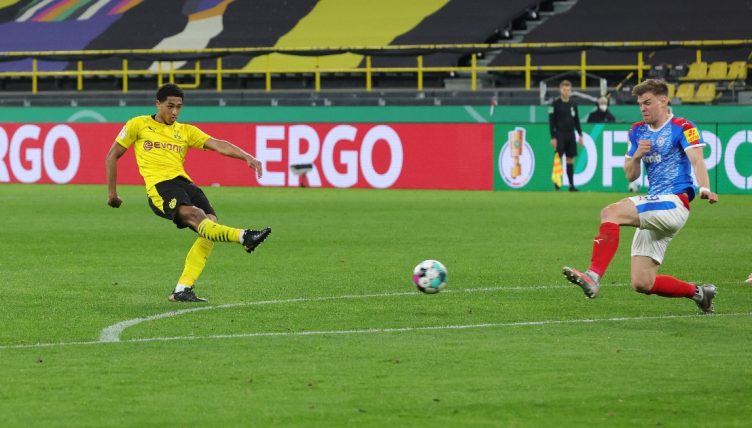 Borussia Dortmund were in ruthless form on Saturday night as they came up against second-tier Holstein Kiel in the semi-finals of the DFB Pokal.

Going in at half-time, Edin Terzic’s side boasted a five-goal lead and their manager was likely already planning for the final against RB Leipzig.

Giovanni Reyna and Marco Reus ensured they were three goals to the good inside 26 minutes, the former claiming a brace from the right-wing.

Thorgan Hazard fired in a fourth before Jude Bellingham got in on the act.

The teenager’s stock continues to rise with each passing week and he was aided by compatriot Jadon Sancho on this occasion.

A determined run from the winger eventually led him to the edge of the Kiel penalty area, where he laid the ball off for Bellingham.

The former Birmingham midfielder struck the ball first time and, with the aid of a deflection, found the net for the fifth time in the famous yellow.

Watch: Jadon Sancho sits opponent down with one drop of the shoulder