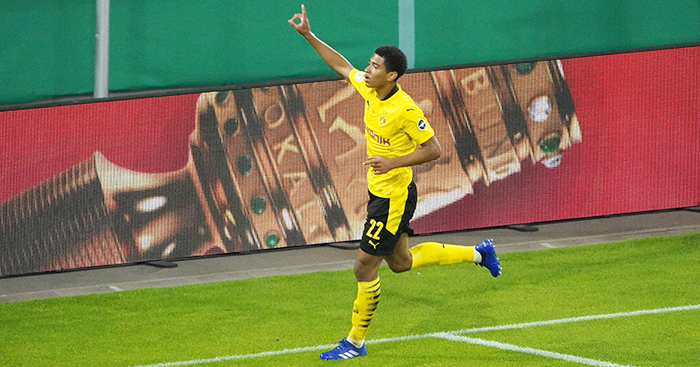 Jude Bellingham needed just 30 minutes of his competitive debut to get off the mark for Borussia Dortmund, becoming the youngest player to score a goal for the club since 1952.

One Englishman, Jadon Sancho, had put Dortmund ahead in their DFB-Pokal first-round tie at third-tier MSV Duisburg from the penalty spot in the 14th minute when Bellingham broke into the box to finish off a flowing move he had already played a part in.

At just 17 years and 77 days old, the former Birmingham midfielder is Dortmund’s youngest goalscorer in 68 years. The goal capped a fine first half, but he was withdrawn on a booking a minute into the second half with BVB 3-0 up and cruising.

Thorgan Hazard had scored the third with a sensational free-kick after Dominic Volkmer had been shown a red card for the hosts, and just five minutes into the second half it was 4-0 when another 17-year-old, Giovanni Reyna, saw his free-kick deflected in.

Watch Bellingham and Hazard’s goals below.