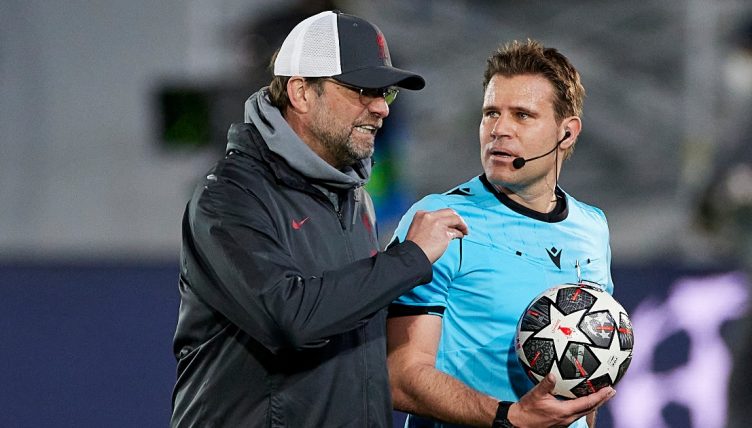 Jurgen Klopp was not pleased with the match officials after Liverpool suffered a 3-1 defeat to Real Madrid in the first leg of their Champions League quarter-final.

The Reds looked off their game and failed to register a single attempt in the first half as they went into the break two goals behind, but improved in the second half as Mohamed Salah notched a vital away goal in Valdebebas.

After the final whistle, Klopp could be seen remonstrating in his native language with the referee Felix Brych, his German compatriot.

“The situation with Sadio, I’m not sure what the ref did tonight,” Klopp revealed later in his post-match interview.

“It seemed like it was sort of personal. I told him after the game, ‘I just thought he was unfair with Sadio.’ He didn’t lose us the game but you need just an OK ref.”

On more than one occasion, Sadio Mane went down following Madrid challenges, but Brych wasn’t buying it.

Klopp on Felix Brych & the decisions against Mane: "For me it was something personal. He dealt with a clean foul like it was a dive. When he went down, it wasn’t right. I told him after I thought he was unfair with Sadio. But he didn’t lose us the game, we weren’t good enough."