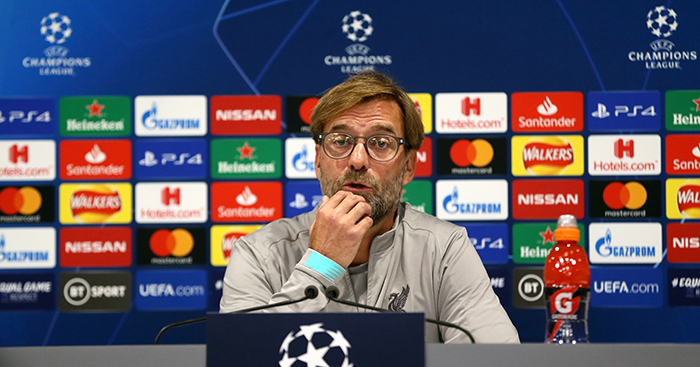 We’ve all been there. You plan what you’re about to say, but the word comes out completely differently. You try to correct yourself, but then you get it wrong again.

Well, that was exactly what happened to one reporter at Liverpool’s press conference on Tuesday ahead of the club’s Champions League clash with Red Bull Salzburg the following evening.

Wanting to ask about the possibility of Liverpool being punished for fielding Pedro Chirivella against MK Dons in the Carabao Cup without him having international clearance, the journalist needed three attempts to pronounce the word ineligible, much to the amusement of Klopp.

Surely one of the world’s most expressionate people, Klopp’s excitement became clear the moment the struggles began and the room soon erupted in laughter.

The German did answer the question in the end, though, expressing his hope that Chirivella himself is not punished in any way: “If it was our fault alone, we need to get punished.

“It didn’t happen on purpose, but my only real concern is the player. He could not play for half a year in Spain last year and if he were not able to play now that would be the biggest problem.

“I am not sure we made a mistake, but the player should not be punished.”

Jurgen Klopp's reaction to a journalist getting tongue-tied… Priceless 😂 pic.twitter.com/5ry4kKl5gF

Seven players who did nothing at Liverpool but shone after leaving