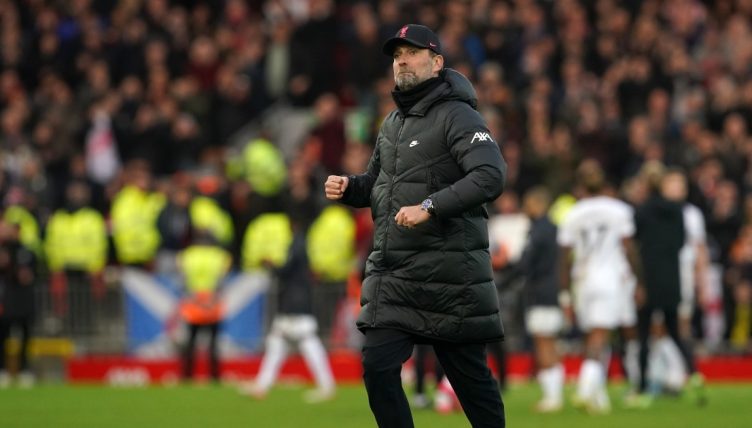 Liverpool manager Jurgen Klopp couldn’t hide his delight after the Reds finally got back to winning ways in the Premier League.

Klopp’s side haven’t been in great form in recent weeks, dropping a total of seven points in their games against Tottenham, Leicester City and Chelsea.

They were strong favourites for the home game against Brentford but lined up without either Mohamed Salah or Sadio Mane for the first time in the Premier League since May 2017.

Liverpool got off to a slow start at Anfield but Fabinho broke the deadlock on the stroke of half-time, heading Trent Alexander-Arnold’s corner into the back of the net.

Alex Oxlade-Chamberlain doubled their lead in the 69th minute before Takumi Minamino came off the bench to seal the win with his sixth goal of the season.

After the full-time whistle, Klopp walked over to the fans in the Kop and did his trademark fist pump celebration.

Liverpool are currently 11 points behind league leaders Manchester City but the German is yet to admit defeat in their title challenge.

“We don’t have to convince anybody outside to believe (we can win the title),” he told reporters after the game. “If they want to believe, they can believe.

“If we would do something like this we wouldn’t do it in public. I think people are with us, they want to enjoy the ride. They are ready to go for it as much as we can.

“This is not the situation to talk about the title race. 11 points, one game in hand. In a normal world, nothing happens anymore but what is normal nowadays?

“We’ve tried to do our part. We have nothing to do with the rest.”

Sloppy first half, lacked intensity and movement up front…2nd half though was much better, happy that Taki got a goal after that horrible miss earlier in the week, Curtis stepped it up a gear in last 30mins #LIVBRE 3-0 pic.twitter.com/scxzTDT0yb