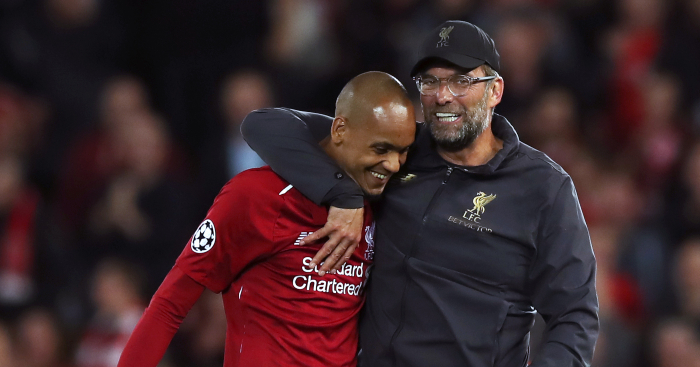 While Jose Mourinho and Gareth Southgate are at loggerheads about the amount of games Harry Kane is playing this season, Jurgen Klopp seemed to have a little dig at Brazil boss Tite for *not* playing Fabinho more often after the midfielder was injured in Liverpool‘s 2-0 victory over FC Midtjylland.

Goals from Diogo Jota and Mo Salah secured the victory, which saw Liverpool establish their place at top of Group D in the Champions League after Atalanta drew with Ajax.

While Klopp appeared in good spirits when he first began talking to Brazilian outlet Esporte Interativo – he initially couldn’t stop laughing at reporter Fred Caldeira’s “Pablo Escobar” moustache – his mood seemed to sour when he started talking about the hamstring injury suffered by Fabinho.

To be fair, if one of his key players is going to fly halfway around the world on international duty, we can understand why Klopp may think that he might as well play in that case.