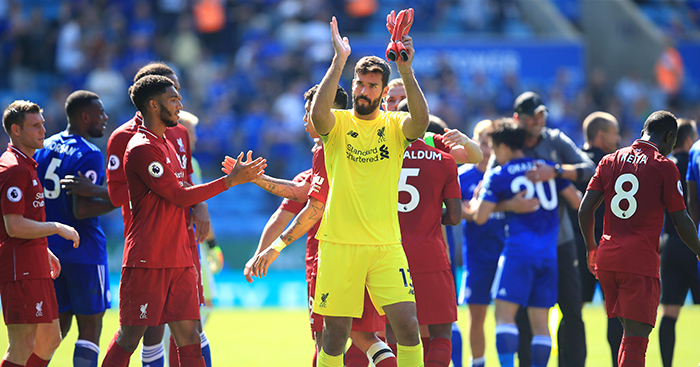 Alisson gifted Leicester City goal at the King Power Stadium on Saturday – but Jurgen Klopp was able to laugh about it afterwards as Liverpool escaped with a 2-1 win.

Alisson kept a clean sheet in each of his first three games to help the Reds take maximum points, and the first player to beat the Brazilian this season was, well, Alisson.

Chasing after a loose back pass, the Brazilian set himself up for a long clearance but at the last minute decided to attempt a chop inside to bamboozle the onrushing Kelechi Iheanacho.

Alisson had proven his ability with the ball the previous week when he chipped the ball past Anthony Knockaert in the win over Brighton, but this time his footwork let him down as he lost the ball and was dispossessed by Iheanacho, who cut back for Rachid Ghezzal to score.

Fortunately for Alisson, Sadio Mané and Roberto Firmino had given the Reds a two-goal cushion, and they were able to see out the final hour after the goalkeeper’s howler to make it four wins from four at the top of the Premier League.

You can watch the mistake and Klopp’s post-match reaction to it below.

WATCH: Jurgen Klopp acknowledged that Alisson made a mistake against Leicester but was happy that it didn't cost Liverpool three points. pic.twitter.com/iMPYF3IdUX