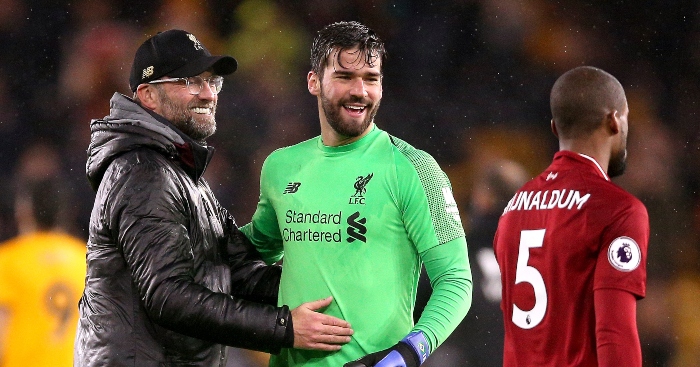 Jurgen Klopp has revealed the hilarious image he was sent by Alisson Becker while the Liverpool goalkeeper is enjoying his summer break.

Alisson is yet to return to pre-season training with the Reds after helping Brazil win the Copa America just over a month after tasting Champions League glory with Liverpool.

The Brazilian’s absence has seen Liverpool surprisingly take Andy Lonergan on trial as part of their squad that is on tour in the USA, in which they have lost to Borussia Dortmund and Sevilla with Sporting Lisbon still to play.

And in an interview with The Anfield Wrap, Klopp revealed he recently text the stopper to check in on his summer, only to receive a ridiculous photo in reply.

"I sent Alisson a message…'are you okay?'

"And he only sent a picture back of him riding a horse with a cowboy hat on." 😂

🇺🇸 Subscribe to watch or listen to our exclusive 20 minute interview with Jurgen Klopp and more from the US 👉 https://t.co/oaOWcUzrlr pic.twitter.com/enngJ2i7X4