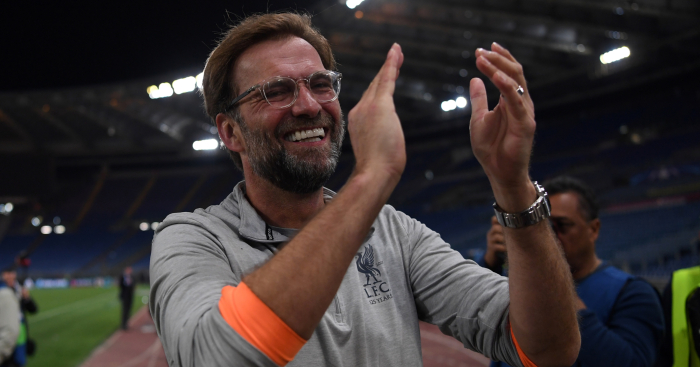 Jurgen Klopp made a surprise appearance at a Liverpool fan event and even joined in with local hero Jamie Webster’s rendition of ‘Allez, Allez, Allez’.

On the eve of Liverpool’s pre-season clash with Manchester United, the Detroit Supporters Club arranged an event at a hotel in Michigan, with around 60 fans in attendance.

Following a Q&A with former players John Arne Riise and Robbie Fowler, musician Webster – who recorded a version of the terrace chant which was sung on Liverpool’s run to the Champions League final – provided the entertainment afterwards with his special BossNight set-list.

Midway through Webster’s set, Klopp stunned supporters by making an entrance before a rousing rendition of ‘Allez, Allez, Allez’.

Before singing the song, Webster said: “It was being sung in Portugal (against Porto) on the concourse and we didn’t know how far it was going to go or what happened.

“Me and my friends said to each other: that song will spur us on in Europe this season, that song could be the new Ring Of Fire. That song did so many things for us.

“So I went home, and I put it on the guitar, give it a bit of life and has been the song of last season, hasn’t it?

“Jurgen, thanks very much, we owe you a lot.”