Watch: Jurgen Klopp stares at Leeds players as they train before kick-off 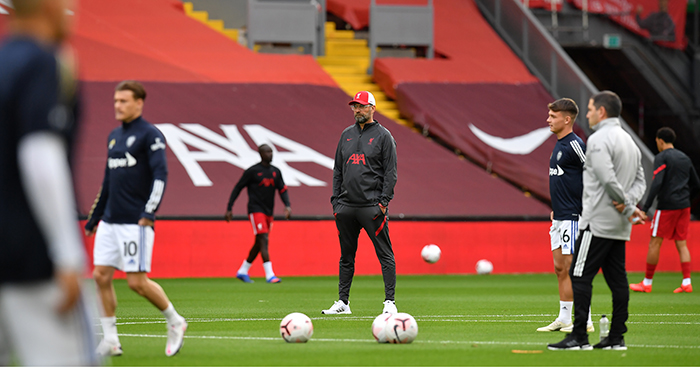 It may be a new season, but some things do not change for Liverpool manager Jurgen Klopp.

The Kop boss was spotted conducting his pre-match ritual of staring at the opposition, as Leeds were put through their paces ahead of the Premier League opener at Anfield, which ended in a thrilling 4-3 win for the hosts.

Klopp aims to get inside the heads of opposition players, even before a ball is even kicked.

Speaking on talkSPORT last month, Brighton striker Glenn Murray said: “Jurgen Klopp does this thing before the game, I don’t know if anyone’s noticed it”.

“It really throws you the first time it happens because you’re like, what is he doing? He’s not even looking at his own team, he’s just watching us. He won’t break his view, he’ll just keep watching the whole time.”

Ex-Sunderland striker Darren Bent also recalled Klopp’s stance as the German watched on when Liverpool faced Derby in the Carabao Cup in 2016.

Nigel Pearson, who was Rams boss at the time, spoke to Klopp when he saw what was happening.

Bent revealed: “It’s funny Glenn says that because when I was at Derby, we played Liverpool in a cup game.

“We were warming up and he did the exact same thing. He stood on the halfway line and watched us warm up.

“It took Nigel Pearson, who was in charge at the time, to go, ‘what’s going on here?’

“He walked up to Jurgen Klopp and went, ‘is everything alright?’ He said ‘yeah, yeah, yeah’ and trotted away.”

And it worked against Leeds too, just, with Mohamed Salah completing a hat-trick with a late penalty to get the Reds’ title defence off to a perfect start.