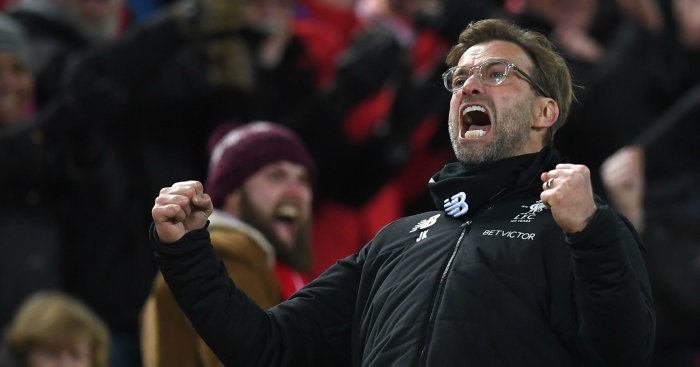 Liverpool and Tottenham played out a thrilling 2-2 draw at Anfield on Sunday, and Jurgen Klopp could not hide his passion on the touchline.

The Reds took an early lead against their top four rivals thanks to Mo Salah’s goal after only three minutes.

Liverpool took their 1-0 lead into half-time but Spurs were reenergised after the break.

Victor Wanyama eventually levelled for the visitors with 10 minutes to go, courtesy of a stunning strike from the edge of the box.

And Spurs had the chance to go ahead in the 86th minute when Loris Karius brought down Harry Kane, who appeared offside, in the box.

Karius, however, saved Kane’s penalty, and Liverpool appeared to have won the game in stoppage time thanks to Salah’s second goal, prompting a frenzied celebration from Klopp.

If I was Klopp I'd be furious that I did all this exercise in the 91st minute for no reason. pic.twitter.com/TXdoWfHYKZ

Unfortunately, for Klopp, the drama did not finish there, and Tottenham won a second penalty when Erik Lamela went down under a challenge from Virgil van Dijk.

This time Kane made no mistake from the spot, equalising in the 95th minute.

Lamela, however, had appeared to go down easily inside the area, and the spot-kick was only given after further consultation with the assistant referee – much to the fury of Klopp.

At the final whistle the Liverpool boss tried to confront the officials, only for Mauricio Pochettino to try calm down his opposite number.

Asked by Sky Sports if John Moss had explained his decisions, Klopp replied: “I am not allowed to go in their room until half an hour after. It was clear offside, unbelievable, I don’t know what they were discussing.

“Yes, Virgil van Dijk touches him, but we all know Lamela wants the touch and we all know they were so hard fouls in the first half and we didn’t get any fouls.

“That was the level for the game today, but then a situation in the last minute like that? Wow. He wanted to be middle of interest and he is.”

Who would be a manager, eh?