Watch: Karim Benzema scores goal so sweet you’ll have it on loop all day 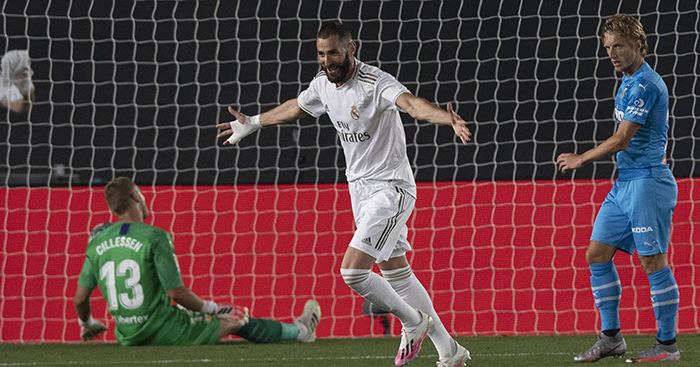 Karim Benzema scored twice to help Real Madrid to a 3-0 win over Valencia on Thursday evening – and the second may well end up being La Liga’s Goal of the Season.

Benzema scored either side of a strike from substitute Marco Asensio with his first touch of the season on his return from an ACL injury.

Asensio also claimed the assist for Benzema’s second, but while the build-up was good, the finish was something else as the Frenchman picked the ball out of the air with one foot then volleyed it in with the other.

The brace moved Benzema above Ferenc Puskas into fifth on Real’s list of all-time top goalscorers on 243 and moves Los Blancos to two points behind Barcelona at the top of La Liga.

It was also a good night for Eden Hazard, who set up the first just after the hour mark – after a first half in which Valencia were the better team and had a goal disallowed for offside by VAR.

But the only thing anyone was talking about after the game was Benzema’s goal which left Zinedine Zidane with his head in his hands in disbelief.

Watch it in all its glory below.