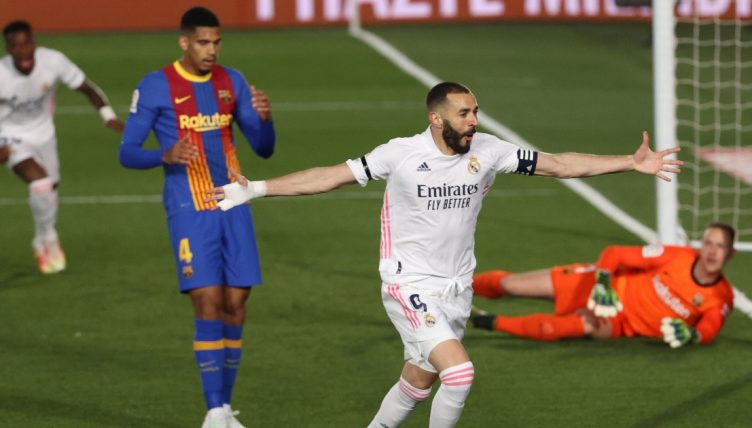 Karim Benzema has been in absolutely sensational form in recent weeks and he took that into Real Madrid‘s potentially season-defining clash with Barcelona.

The Frenchman came into El Clasico with nine goals in his last eight appearances for Los Blancos, and added another to his tally inside just 13 minutes in sensational style.

Barcelona travelled to the Alfredo di Stefano Stadium on Saturday night on an excellent run, unbeaten in 16 in La Liga and with 12 wins from their last 13 to challenge Real and Atletico at the top of the table.

But they hadn’t bargained for the ingenuity of one of the best players in Spain, with Benzema underlining his quality with his 19th La Liga goal of the season with an audacious backheel flick past Marc Andre ter Stegen.

A short while later, Real doubled their advantage through a Toni Kroos free-kick, giving them a commanding two-goal lead heading into the second half. A win would see Madrid go top of the table above their city rivals, and a point ahead of Barcelona.