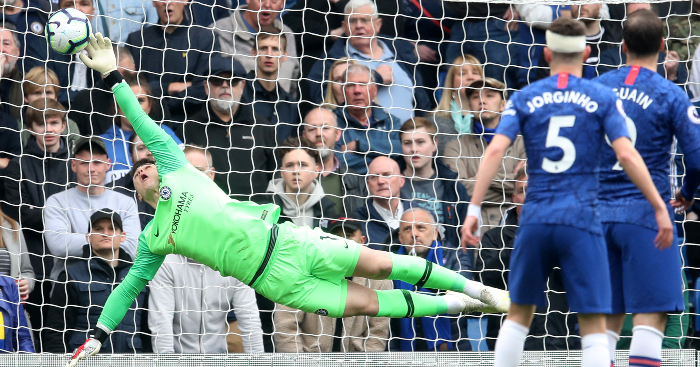 Chelsea goalkeeper Kepa Arrizabalaga produced a sensational save to stop Watford‘s Troy Deeney putting his team ahead at Stamford Bridge.

Ever since his controversial argument with Maurizio Sarri, in which he refused to be substituted against Man City in the Carabao Cup final, he’s been in brilliant form. Here, he added another great moment to his Chelsea highlight reel.

It was an important stop, with it goalless at the time, as the Blues battle to qualify for the Champions League. Later, goals from Ruben Loftus-Cheek, David Luiz and Gonzalo Higuain put them into a commanding position going into the final round of fixtures next weekend.

It's a late contender for Save of the Season as Kepa keeps @WatfordFC out early on!

A save so good it’s worth watching the replay from another angle, over and over again:

what a save from Kepa. 💪🏾pic.twitter.com/moMY9D4nGp