Watch: Kevin De Bruyne with excellent nutmeg on the turn vs Arsenal 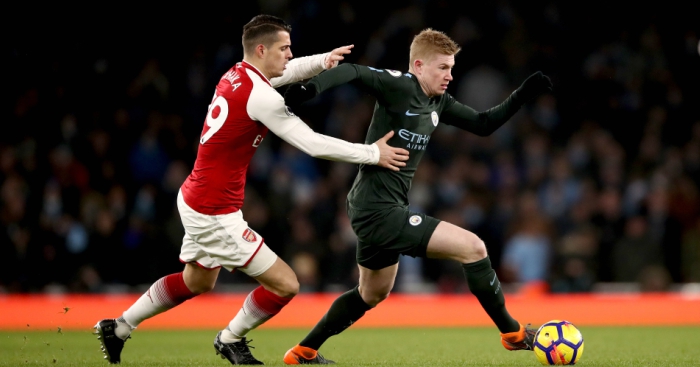 Manchester City thumped Arsenal 3-0 for the second time in five days in the Premier League on Thursday night.

Bernardo Silva netted the opener with a well-taken strike before his namesake David added a second on the end of a fantastic team move made it two.

Leroy Sane sealed the three points just after the half-hour mark to cap a fine personal performance and take City to within five victories of the Premier League title.

In the absence of Fernandinho, playmaker Kevin De Bruyne was asked to play from a slightly deeper position in the match, but he still displayed his trademark extensive passing range and ability to control a game.

It may have been Manchester City’s dominant team display which caught the eye in front of a visibly empty Emirates, but one piece of skill from De Bruyne late in the contest was just wonderful.

De Bruyne picked up the ball out wide, under pressure from Shkodran Mustafi, who stuck tight to his man but the Belgian pulled off an incredible turn and nutmeg to skip away from the Arsenal defender.