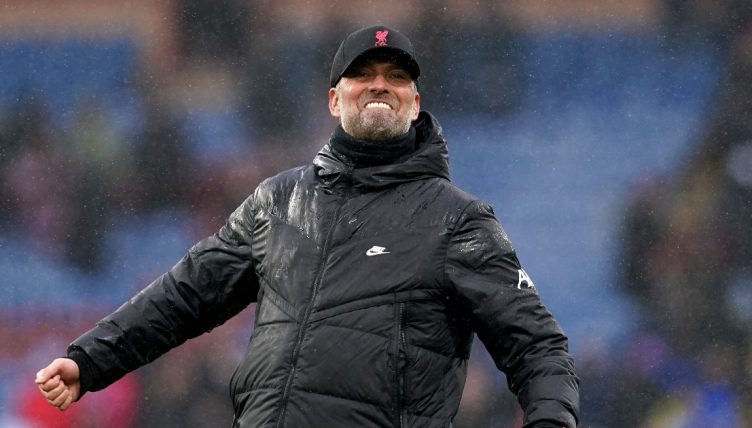 Liverpool manager Jurgen Klopp along with players Thiago and Kostas Tsmikas wildly celebrated their teammate Fabinho’s goal against Burnley which gave the Reds a much-needed 1-0 win in the Premier League.

The goal came in the 40th minute, the game deadlocked with Liverpool having been frustrated by a resolute Burnley defence.

A whipped corner from Trent Alexander-Arnold was met by AFCON winner Sadio Mane, who dived low and headed the ball into the six-yard box.

Fabinho ran onto the ball, first kicking it against Burnley’s goalkeeper Nick Pope before firing the rebound home.

It triggered Klopp, Thiago, and Tsmikas to celebrate on the sidelines.

All three got up off their seats, Klopp punching the ground several times.

Thiago celebrated by shouting before Tsmikas came up behind him and jumped on his back.

The midfielder then hit Tsmikas on the back while the two walked back to their seats in the dugout.

Fabinho’s goal would prove to be the only goal of the game, the match played out in difficult, windy conditions at Turf Moor.

“I am absolutely delighted with the way we played in the circumstances, it was so tricky,” Klopp said after the match.

“Only if you stood on the pitch I think you could really feel the wind to the whole extent,

“It was ridiculous because it came from all directions.”

It was an important victory for Liverpool and ensured that the gap between them and league leaders Manchester City remained at nine points.

Liverpool have a game in hand on the defending champions and the two sides play each other in early April in what will likely be a title-deciding match.