Watch: Klopp fumes on sideline after Sevilla man sent off for horror tackle 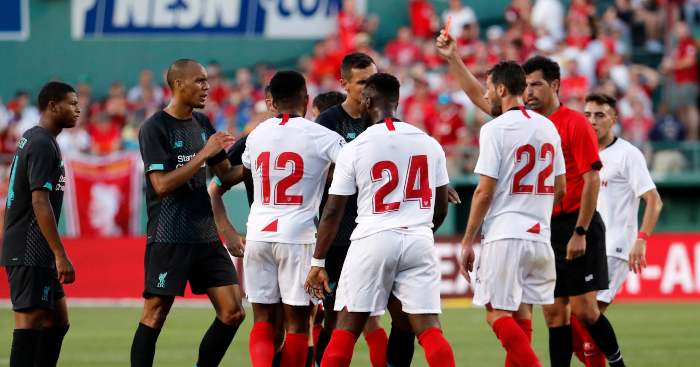 Jurgen Klopp was left fuming after Liverpool prospect Yasser Larouci was stretchered off following a wild kick out from Joris Gnagnon in the Reds’ pre-season friendly defeat to Sevilla.

Sevilla snatched a 2-1 victory late on at Boston’s Fenway Park through Alejandro Pozo. Former Manchester City man Nolito had given the Spanish outfit a first-half lead before Divock Origi equalised by smashing home from a corner.

But the game’s major talking point came in the 80th minute when Gnagnon saw red for a horror challenge on Larouci, although Klopp revealed afterwards that the 18-year-old left-back escaped without a serious injury.

“It looks like he was lucky,” Klopp said. “Of course, how it always is with these things we have to wait a little bit.”