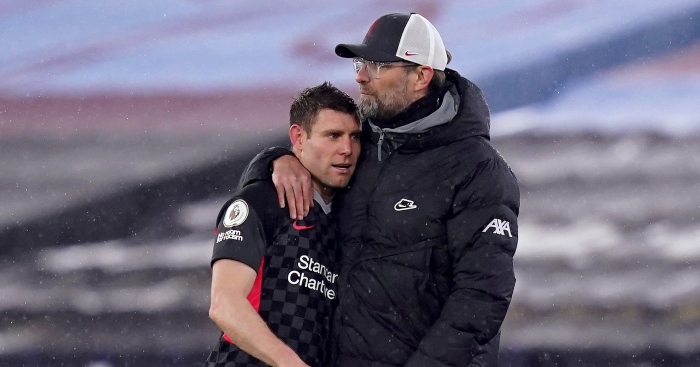 Jurgen Klopp and James Milner saw their touchline argument turn to smiles after Liverpool scored their opening goal during the 3-1 win at West Ham.

Liverpool went into the game needing to win against in-form opponents to remain in touch with Premier League leaders Manchester City.

But the champions were initially frustrated by the Hammers and Klopp decided to make a change as they sought a breakthrough.

Milner was substituted early into the second-half and exchanged some heated words with his manager on the touchline.

The argument between boss and veteran turned into smiles and hugs – providing a heartwarming scene for Liverpool fans.

“He was not unhappy,” Klopp said after the game. “At half time we changed formation, Milly deeper. I told him because of stiff hamstring to pass more than run. We waited to take him after Curtis’ warm-up.

“He came off and said ‘you told me to run less then you take me off!’ but then he said ‘yes, good decision boss'”.