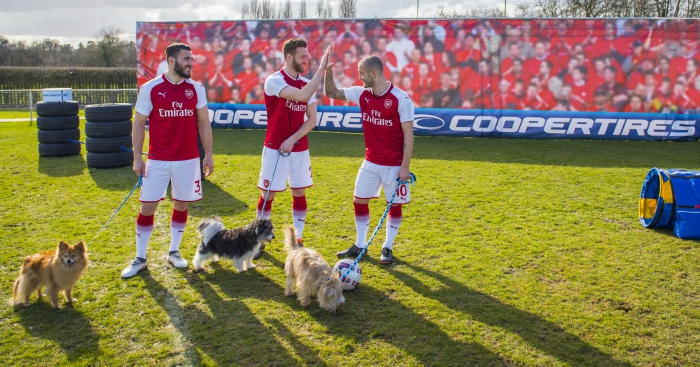 Alexis Sanchez may have left Arsenal, but the dog-loving members of their squad recently went head-to-head in the ‘Cooper Tire Agility Course’.

Defenders Sead Kolasinac and Calum Chambers lined up alongside midfield terrier Jack Wilshere, who were each partnered with a fetching canine companion and given the chance to prove their dog-handling skills against the clock.

Bosnian left-back Kolasinac was partnered with Battersea dog ‘Woody’, Calum Chambers with rescue dog ‘Buddy’ and last but not leashed, Wilshere teamed up with the aptly named cross-breed ‘Cheeky’.

Each player was challenged to lead their respective dogs around a custom-built dog agility course, with obstacles made from Cooper Zeon 4XS Sport tyres, designed for the medium and large SUVs favoured by many Premier League footballers.

The challenge finished with three attempts to kick a ball through a tyre hanging from the crossbar – with the clock stopping if the ball went through the tyre or after three unsuccessful attempts.

See which of the three players came out on top below.