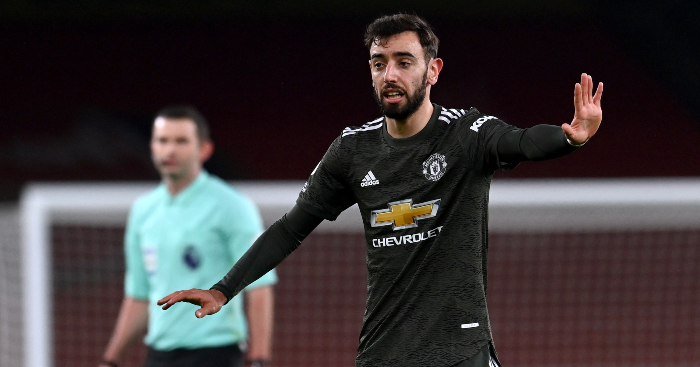 Big games are coming thick and fast this season and we were treated to another at the Emirates on Saturday evening as Arsenal and Manchester United clashed.

The Red Devils were eager to bounce back from their embarrassing midweek loss to Sheffield United whilst Mikel Arteta’s men hoped to build on an impressive victory against Southampton.

It did not take long for things to heat up either. A riled Bruno Fernandes, who moments earlier had caught a flying arm from his compatriot Cedric Soares, went in rashly on Granit Xhaka.

With the Swiss midfielder facing away from his opponent, Fernandes arrived with nasty, raking challenge down his ankle.

The decision was checked by VAR but quickly came to the decision that no further action was required.

But looking back on the incident, it is easy to see why many watching from home felt the Portuguese had got away with one.

When you rake your studs down someone’s Achilles and it’s clearly not a challenge for the ball, how is it anything other than a red card? pic.twitter.com/cRLpsziyV0