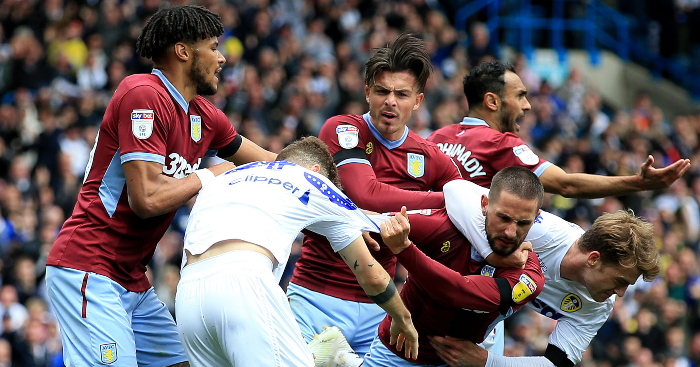 There were sensational scenes of sh*thousery at Elland Road as Leeds United and Aston Villa played out a 1-1 draw.

Mateusz Klich opened the scoring after Villa striker Jonathan Kodjia had gone down injured. The game slowed down and it looked like Leeds forward Tyler Roberts might put the ball out of play, but instead he played a ball through to Klich, who ran through to slot home.

From there, everything erupted. Almost all of the outfielders were involved in scuffles, while Patrick Bamford feigned getting hit by Anwar El Ghazi, who subsequently was shown a red card.

There were also choice words shared on the sidelines between Villa assistant John Terry and Leeds boss Marcelo Bielsa – who then instructed his team to allow their opponents to go up and score at the other end, much to the annoyance of his centre-half Pontus Jansson, who put in a half-hearted challenge to try stop Albert Adomah.

A repeat in the play-off final? Yes please.

Watch all the action below:

The most incredible scenes we have EVER seen! You need to see this to believe it 😲

Bamford, you are everything wrong with football #avfc #lufc pic.twitter.com/VW3Mu7Z2N6

Bielsa and Terry’s war of words:

Heres a separate clip of Bielsa and John Terry going at each other #LUFC #MOT pic.twitter.com/sDNtJHLUtM