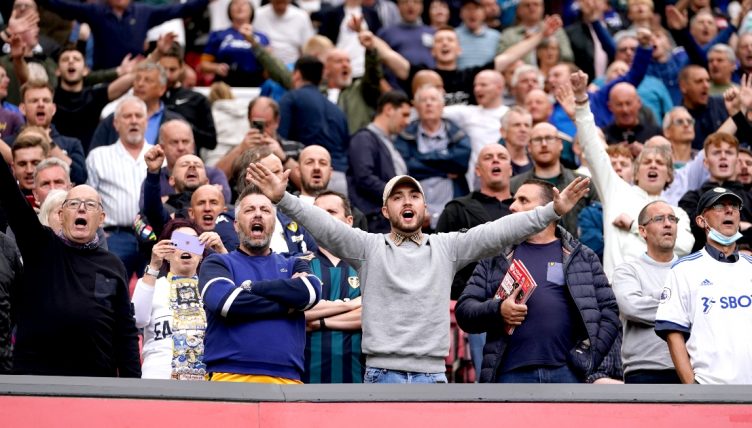 The 2021-22 season could not have got off to a much worse start for Leeds United as they were hammered 5-1 by Manchester United at Old Trafford, but the travelling fans remained in high spirits throughout.

Bruno Fernandes scored a hat-trick to secure the points with Mason Greenwood and Fred adding a bit of gloss to the scoreline. It meant Luke Ayling’s stunning equalising goal at the start of the second half was all for nothing.

It is a result that will likely see Marcelo Bielsa’s side in the relegation zone at the end of game week one, but it is unlikely any of the travelling Leeds fans will care at all.

They were in fine voice throughout the game, revelling in the opportunity to see their side play the Red Devils in the top-flight again, and they were still singing when Ole Gunnar Solskjaer came out for his post-match interview.

As the Norwegian poured praise on his side, the sound of the Leeds fans belting out ‘Marching On Together’ was unmistakable, flowing into other favourites across the five-minute clip.

Have a listen to them in the clip below.

"Yeah, you're excited, of course."

Ole Gunnar Solskjær can't have dreamed of a better start to the season! 😄@mrjakehumphrey, @rioferdy5, and Joe Cole catch up with the Man Utd boss… pic.twitter.com/18hNGBM5kv