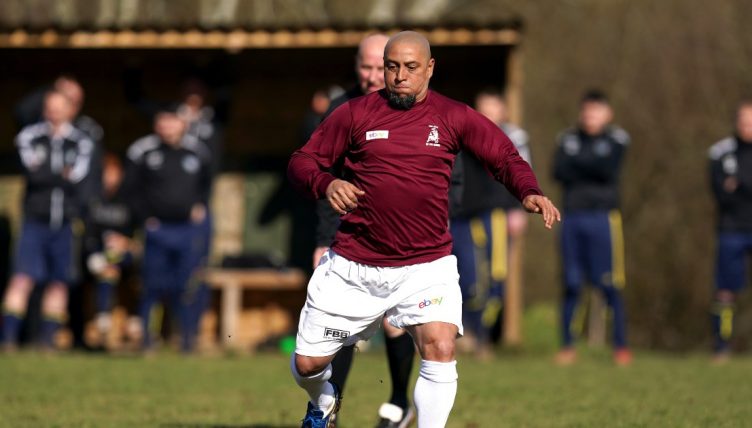 In a turn of events no one could have ever predicted, Roberto Carlos and his new team-mates facetimed Real Madrid legend Sergio Ramos from a pub in Shropshire.

Carlos played one game for pub-side Bull in the Barne United after the club won a prize to have the former Brazil international turn out for them.

The Bull in the Barne lost the match 4-3, but that did little to bring down the mood on the day and Roberto Carlos even scored a late penalty.

“Football is amazing and even though I’ve had the opportunity to play with the biggest names in world football, playing here is very enjoyable,” Carlos said to the Press Association after the match.

“Always good to score a goal!

“A lot of people don’t realise that even though I played with some of the biggest clubs and best players in the world I started ‘here’ in Brazil, at 13, 14 years old.

“It brings back great memories for me playing on pitches like this.”

After the match, the club celebrated at the pub along with Carlos who decided to facetime Ramos. With the players surrounding the phone, there was a loud cheer when Ramos unbelievably answered the phone.

The PSG centre-back was all smiles after the brilliant reception and pumped his fist at the pub crowd.

While we’re not sure if Carlos will be spending his summer holidays in Shropshire, he said that he loved visiting the area.

“I really enjoyed it – I also come from a small-town background, so I like the vibe in the area,” he said.

“I had a nice day here yesterday in the area, so I’ve had time to get to know it.”

Roberto Carlos now plays for a Sunday League team in Shropshire, tonight he’s been out on the beers with his teammates and decided to FaceTime Sergio Ramos.