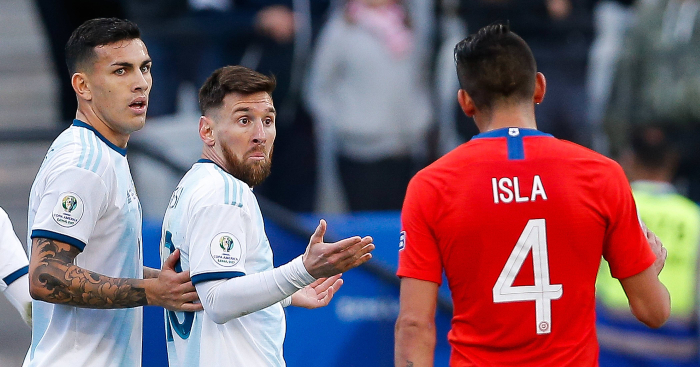 Lionel Messi was sent off for just the second time in his career, and the first time in 14 years, as Argentina beat Chile in a fiery encounter in the Copa America’s third-place play-off.

First half goals from Sergio Aguero and Paulo Dybala, the first of which was created by Messi, helped Argentina to a 2-1 victory, but the Barcelona superstar was sent off before half-time for a bizarre clash with Gary Medal, who was also given his marching orders.

Messi had challenge Medal from behind as the former Cardiff City player shepherded the ball out of play, and the defender reacted angrily.

Medal mainly seemed to try batter Messi with his chest, while the forward looked slightly bemused, but that was enough for both players to be given a red card.

Afterwards, an angry Messi, who had already criticised officials after Argentina were beaten by Brazil in the semi-finals, boycotted the medal ceremony.

“What I said, happened. I didn’t go to the podium because we shouldn’t be part of the corruption and lack of respect,” Messi later said in an outburst, as quoted by journalist Roy Nemer.

“We were meant for more but they didn’t let us be in the final. The corruption and the refs didn’t allow the people to enjoy and football is ruined.

“The corruption and the referees didn’t allow us to be in the final. You have to say the truth.”

South American football federation CONMEBOL later released a statement in which they did not refer to Messi specifically, but insisted: “Said accusations represent a lack of respect for the competition, all the football players involved and the hundreds of professionals of CONMEBOL, institution that since 2016 has been tirelessly working to transparent, professionalize and develop South American football.”