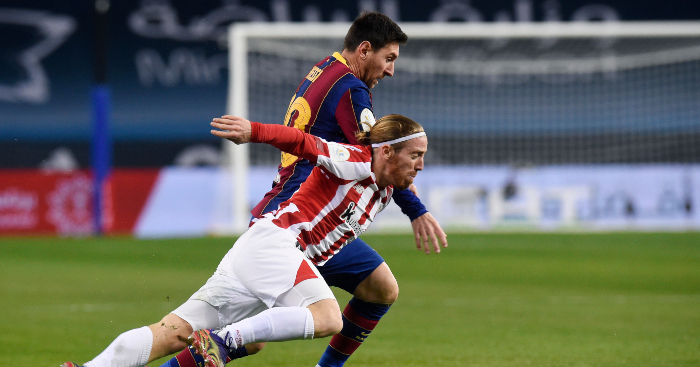 Lionel Messi was sent off for the first time in his Barcelona career as the Catalan giants were beaten 3-2 in extra-time by Athletic Bilbao in the Spanish Super Cup final.

With uncertainty surrounding Messi’s future following his explosive transfer request in the summer, what could be the forward’s final season at the Camp Nou is becoming clouded in disappointment, with Barcelona seven points behind La Liga leaders Atletico Madrid having played two fixtures more.

The chance to collect some silverware in the form of the Super Cup was squandered as Barca twice let a lead slip as Antoine Griezmann’s brace was cancelled out by goals from Oscar de Marcos and Asier Villalibre before Inaki Williams curled home a stunning winner in extra-time.

Villalibre, who led Athletic’s celebrations at full-time by playing the trumpet, was also involved in the incident that saw Messi sent off with only a couple of minutes left of extra-time.

Messi appeared to strike the forward after a coming together off the ball and was subsequently sent off after a VAR check.

“I can understand what Messi did,” Barca boss Ronald Koeman said afterwards. “I don’t know how many times they fouled him, and it’s normal to react when they keep trying to foul you as a player who is looking to dribble with the ball, but I need to see it again properly.”

Given Messi could now be suspended for four domestic games, Koeman may not be so understanding behind the scenes.

Watch the incident below, followed by a second clip with the footage slowed down.