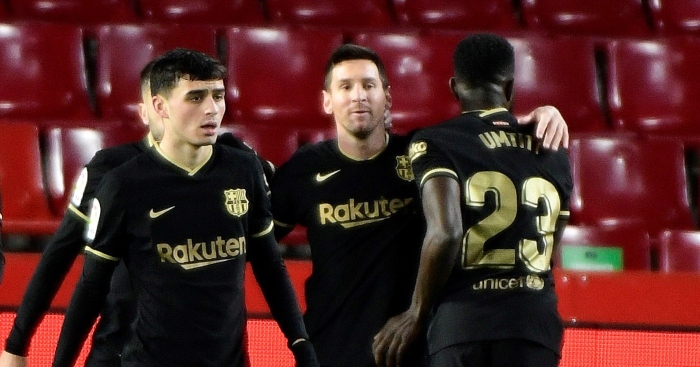 After a difficult start to the season, Barcelona‘s Lionel Messi has rediscovered his best form in recent weeks and scored a brilliant brace against Granada.

Messi reluctantly decided to remain at the Nou Camp after being linked with a move to Manchester City last summer but initially looked out of sorts.

“I had a really bad time of things in the summer. It had been building up,” Messi told La Sexta in December.

“What happened before the summer, what with how the season ended, the burofax and all the rest of it. I ended up carrying that over a bit into the start of this season.”

He started 2021 with a brace in their 3-2 win against Atheltic Bilbao and carried that form into their game against Granada.

Antoine Griezmann fired Barcelona ahead before Messi doubled the Spanish giants’ lead with a curling effort into the top corner in the 35th minute.

The Argentina international then made it 3-0 with a cheeky free-kick before Griezmann got his second goal of the game in the second half.

Messi doubles the Barca lead with a trademark finish! 🙌

After a slow start to the season, Barca's legendary No. 10 is starting to hit top form 🔥 pic.twitter.com/3g7i91dpAJ

Granada were preparing for the free kick to go under the wall, so Messi went low into the other corner instead 👏 pic.twitter.com/trTUi3ElhA