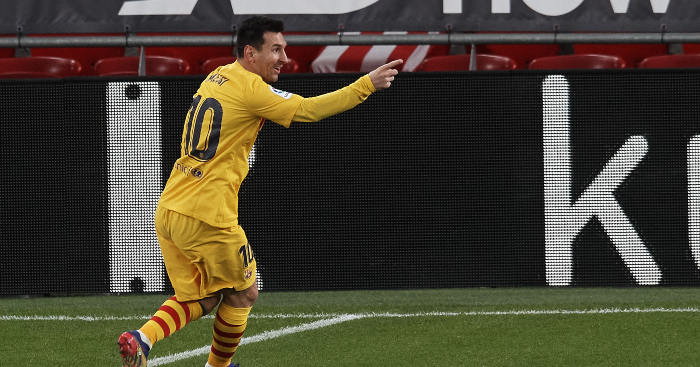 While uncertainty surrounds Lionel Messi‘s future at Barcelona, the Argentina superstar’s goal against Athletic Bilbao on Wednesday night contained evidence that brighter days could still be on the horizon at the Camp Nou.

Messi* is now able to negotiate with foreign clubs as he enters the final six months of his contract at Barca, with little sign of a new deal to be agreed after his explosive transfer request in the summer.

While Barcelona have endured a tough time under new boss Ronald Koeman in 2020-21, there have been a number of encouraging signs in the performances of some of their young players, most notably Pedri and Ansu Fati.

Pedri has already shown he is operating on the same wavelength as Messi with an eye-catching assist for the 33-year-old‘s record-breaking (don’t you start, Pele) 644th goal for Barcelona.

And the duo linked up once more to devastating effect in Barca’s La Liga clash at Athletic Bilbao. Athletic actually took the lead early on through Inaki Williams, only for Pedri himself to equalise.

The 18-year-old then laid on a brilliant goal for Messi to put Barca ahead with a cheeky backheel that bamboozled the Bilbao defence.

Pedri is starting to build up quite the partnership with Messi 👀 pic.twitter.com/AIUrUgDtp5

*Buy Lionel Messi and thousands of other players on Football Index. 18+, UK and Ireland customers only, begambleaware.org. T&Cs apply.