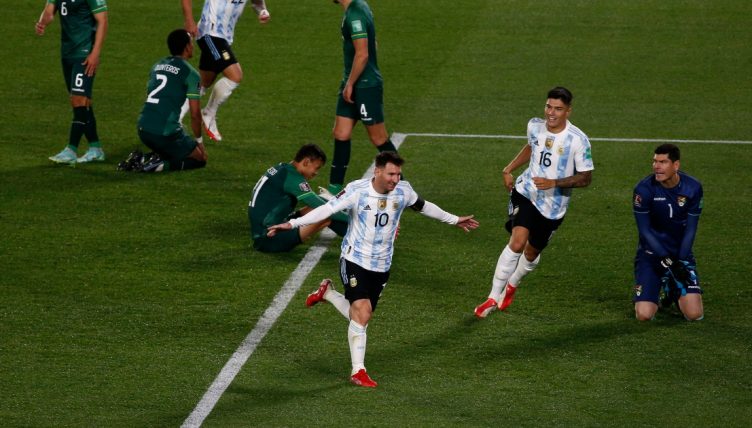 Even by his standards, Lionel Messi‘s solo goal during Argentina’s 3-0 win over Bolivia was sensational.

Messi, who has overtaken Pele as the leading South American goalscorer in international matches, scored a hat-trick in Argentina’s World Cup qualifier on Thursday which has taken them a step closer to Qatar 2022.

And the PSG man broke the deadlock with a goal we’ll be talking about for a long time.

Taking on the Bolivian defence, Messi nutmegged an opponent before curling a sublime shot past goalkeeper Carlos Lampe.

He added to his total in the second half, dribbling past a helpless defender for his second goal before completing his hat-trick with a late tap-in.

After the match, Argentina captain Messi and his team-mates celebrated with the Copa America trophy in front of 20,000 fans at the Monumental Stadium in Buenos Aries.

“I dreamed about this day a lot and thanks to God it arrived,” Messi wrote on Instagram alongside a picture of the team with the trophy after the match.

“I don’t have words to thank you for all the love I’ve received. What a beautiful night, I enjoyed it so much – unforgettable.”

Brilliant Lionel Messi goal last night, on his way to a hat-trick.pic.twitter.com/4isKwqjuqF

It's a hat trick for Lionel Messi! 🎩

"The maestro has done it!" 🗣️ pic.twitter.com/JhE4fGuFQY