Watch: Lionel Messi scores two and helps set up other in 3-1 friendly win 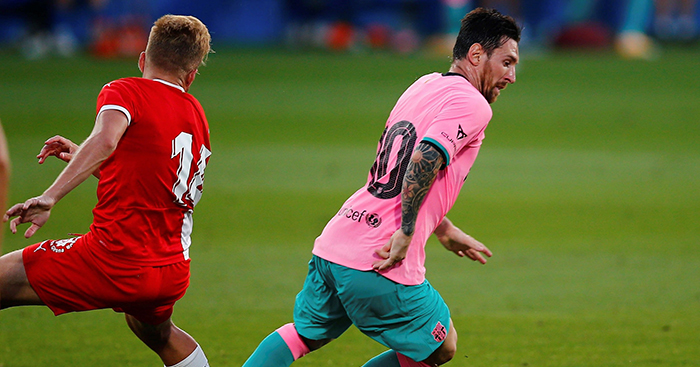 Lionel Messi might not particularly have wanted to be at Barcelona by now – but that doesn’t mean he isn’t going to carry on being brilliant.

Messi handed in a transfer request and hoped to leave Barca on a free transfer, but he has only stayed because it was clear that could not happen and he doesn’t want to fight a bitter legal battle.

The Argentine featured in the Catalans’ first pre-season friendly at the weekend, a 3-1 win over Gimnastic, and on Wednesday night he really flexed his muscles for the first time, scoring twice and having a hand in the other in a 3-1 win over Girona.

Philippe Coutinho scored the first, tapping in a Francisco Trincao cross after Messi had played him in, before Messi made it 2-0 just before half-time when he made space for himself on the edge of the box and sent in a shot which went in off the post.

Girona pulled one back through Samuel Saiz at the start of the second half, but Messi restored the hosts’ advantage shortly after at the Johan Cruyff Stadium when his effort found the back of the net via a deflection.

You can watch all three Barca goals below.

Receive the pass.
Turn around.
Off the back.
Nothing but net.

Barcelona start their La Liga campaign on September 26 or 27 against Villarreal.

Watch: All the Barcelona goals from opening pre-season friendly win