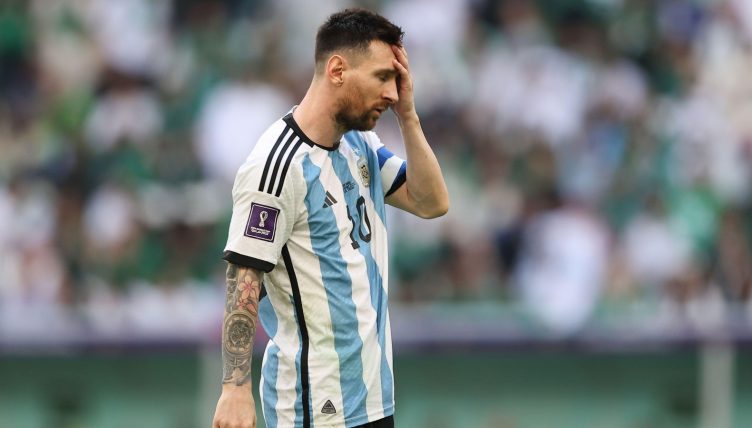 Lionel Messi’s quest for World Cup glory began in ignominy on Tuesday as Argentina fell to a shock defeat against Saudi Arabia – and the underdogs couldn’t help rub Messi’s face in their victory.

Argentina, who are one of the favourites to win this year’s tournament in Qatar, were beaten 2-1 by their unfancied opponents in one of the biggest surprises in the history of the World Cup.

Messi’s penalty gave Argentina the lead after just ten minutes at the Lusail Stadium but Saudi Arabia roared back in the second half to claim an astonishing win.

Speaking via Argentina’s official Twitter account after the game, Messi said: “We knew that Arabia is a team with good players, that moves the ball well and that advances the line a lot. We work on it, but we speed up a bit.

“There are no excuses. We are going to be more united than ever. This group is strong and they have shown it. It is a situation that we did not have to go through in a long time.

“Now we have to show that this is a real group. It’s a very hard blow for everyone, we didn’t expect to start like this.

“Things happen for a reason. We have to prepare for what’s coming, we have to win or win and it depends on us”.

Messi, like his side, gradually faded as the game progressed and one of his Saudi Arabian opponents, Ali Al-Bulaihi, even found the time to troll the 35-year-old.

After slapping him on the back, the Saudi defender exchanged words with Messi and made the PSG forward laugh at something he said.

Argentina’s next match is on Saturday and they’ll need to claim a positive result against Mexico to stand any chance of progressing to the last 16.